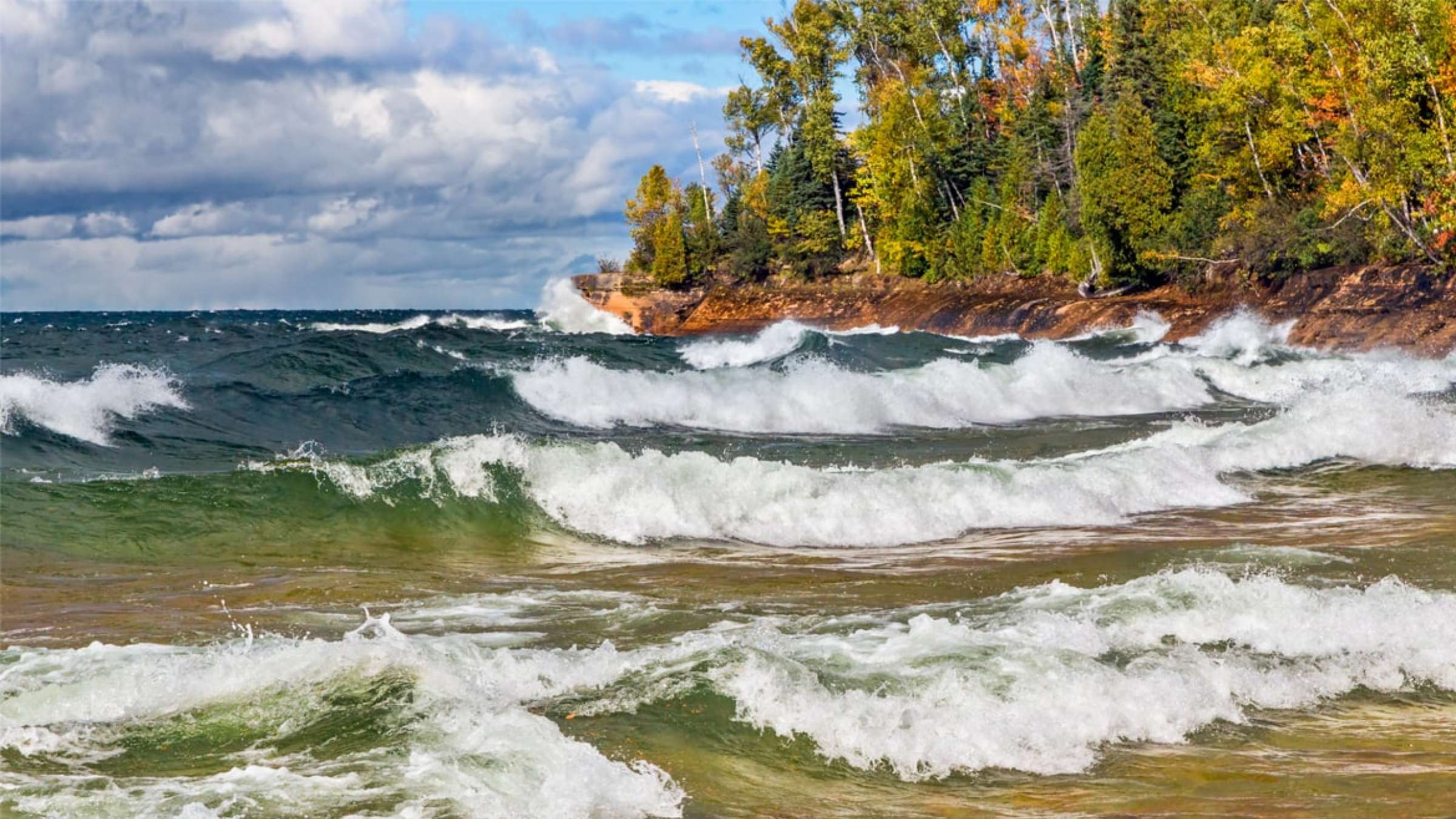 The first extensively documented air pressure–driven meteotsunami on one of the Great Lakes presents an opportunity to use existing weather models to predict when these potentially deadly waves will strike.

These waves were “by far the most dramatic in terms of the amount of rise and fall of the water level within just a few minutes.”

On 13 April 2018, large waves up to 2 meters high (more than 6.5 feet) traveled across Lake Michigan and hit Ludington, a city of some 8,100 people in Michigan, damaging homes and docks. For local photographer Todd Reed, who frequently photographs storms along the Lake Michigan shoreline, this event was especially memorable. “I have experienced several storm surges over the past several decades,” Reed said. These waves were “by far the most dramatic in terms of the amount of rise and fall of the water level within just a few minutes,” he said.

According to Eric Anderson, a physical scientist at NOAA’s Great Lakes Environmental Research Laboratory, most global meteotsunamis are driven by atmospheric pressure changes. But the Great Lakes region is different. “We’ve generally seen that meteotsunami need an extra boost from jumps in wind speed as well, and [usually] those happen through a thunderstorm-type event,” said Anderson.

The waves in 2018 were unusual because they were the first extensively documented case of a Great Lakes meteotsunami caused by an atmospheric inertia–gravity wave (in other words, a large air pressure–driven event) and not by a storm.

With atmospheric pressure changes similar to the 2018 Ludington event causing most meteotsunamis around the world, Anderson and his NOAA colleague Greg Mann thought to test whether this type of meteotsunami is predictable using existing forecast models. In doing so, the scientists hope to accurately predict future meteotsunamis and therefore avoid not only property damage but also loss of life.

Tsunamis are usually caused by earthquakes or landslides, whereas meteotsunamis are generated by air pressure changes, winds, and severe thunderstorms. Not to be confused with a seiche, these waves can happen anywhere, with the East Coast of the United States getting an average of 25 annually. To this day, meteotsunamis have been challenging for experts to predict, as they can occur after storms amid clear skies and stable weather.

In 2017, meteotsunamis were recorded for the first time in the Persian Gulf following a tropical cyclone, where waves of up to 2 meters (6.5 feet) killed five people and traveled about a kilometer inland along the coast of Iran. Meteotsunami fatalities have also occurred along the Great Lakes. On 26 June 1954, 2 hours after storms had passed, a wave about 3 meters (9.8 feet) high swept people off piers near Chicago, killing seven.

Even in 1954, forecasters in the United States knew that passing squalls and pressure changes could mean large waves, yet NOAA has noted that there is no forecast model to date that can effectively predict when such waves will strike. Another challenge for predicting meteotsunamis in the Great Lakes area specifically is that there are no tsunami detection buoys deployed on the lakes.

But Anderson and Mann believe they have found a promising way to forecast these pressure change-driven events. After analyzing the 2018 Ludington event, they discovered that weather and hydrodynamic models could predict the atmospheric waves behind meteotsunamis minutes to hours before they occur.

They published their findings in a recent study that was part of a meteotsunami issue of the journal Natural Hazards. In their article, the scientists described how they reconstructed the 2018 Ludington event through atmospheric and hydrodynamic model simulations of the atmospheric inertia–gravity wave and the meteotsunami.

“We might have the ability to forecast at least a subset of the meteotsunami that impact the U.S.”

“The good news is that atmospheric inertia–gravity waves generated by large-scale weather systems have a higher predictability compared to organized thunderstorm clusters, and what we’ve shown in this study is that NOAA’s existing operational weather and hydrodynamic models are capable of re-creating this event,” said Anderson. “That means we might have the ability to forecast at least a subset of the meteotsunami that impact the U.S.”

“NOAA forecasters equipped with these model predictions, in combination with observational data sets like radar, satellite, and frequent observations from airports and water level gauge sites, will be able to provide valuable hazardous condition information for those at the shoreline, in harbors, or on the water,” Mann added. “The models can play a vital role in raising awareness for the potential of extreme conditions.”

While investigating how meteotsunamis could change with climate trends, the researchers plan to move toward building forecast capability. However, there could be some challenges, including the need for additional atmospheric modeling to be included in the NOAA team’s forecasting tool.

David Williams, a former University of Liverpool researcher who coauthored a 2019 study on modeling of English Channel meteotsunamis, said, “I am currently unconvinced that our atmospheric forecasting is good enough to use such that we can ‘forecast’ meteotsunami in real time in any sophisticated way.”

Until experts are able to accurately predict meteotsunamis, it is important for people who live and visit areas where they are known to occur to be careful during storms as well as at times of air pressure changes. Debbie Maglothin, for instance, witnessed the 2018 meteotsunami event on Lake Michigan and said she understands the dangers that are possible along the shores of the lake. “Now that I’ve witnessed what Lake Michigan can do, I will not walk on the break wall,” she said.

Related information
Related links
Fujitsu leverages world's fastest supercomputer and AI to predict tsunami flooding
2016 Ecuador tsunami and tremor data could predict future earthquake impact, analysis suggests
Looking in the past to predict the next tsunami
Scientists warn: Humanity does not have effective tools to resist the tsunami
Krakatoa is still active, and we are not ready for the tsunamis another eruption would generate
Keywords
Hazards
Tsunami
Themes
Early Warning
Risk Identification & Assessment
Country & Region
United States of America