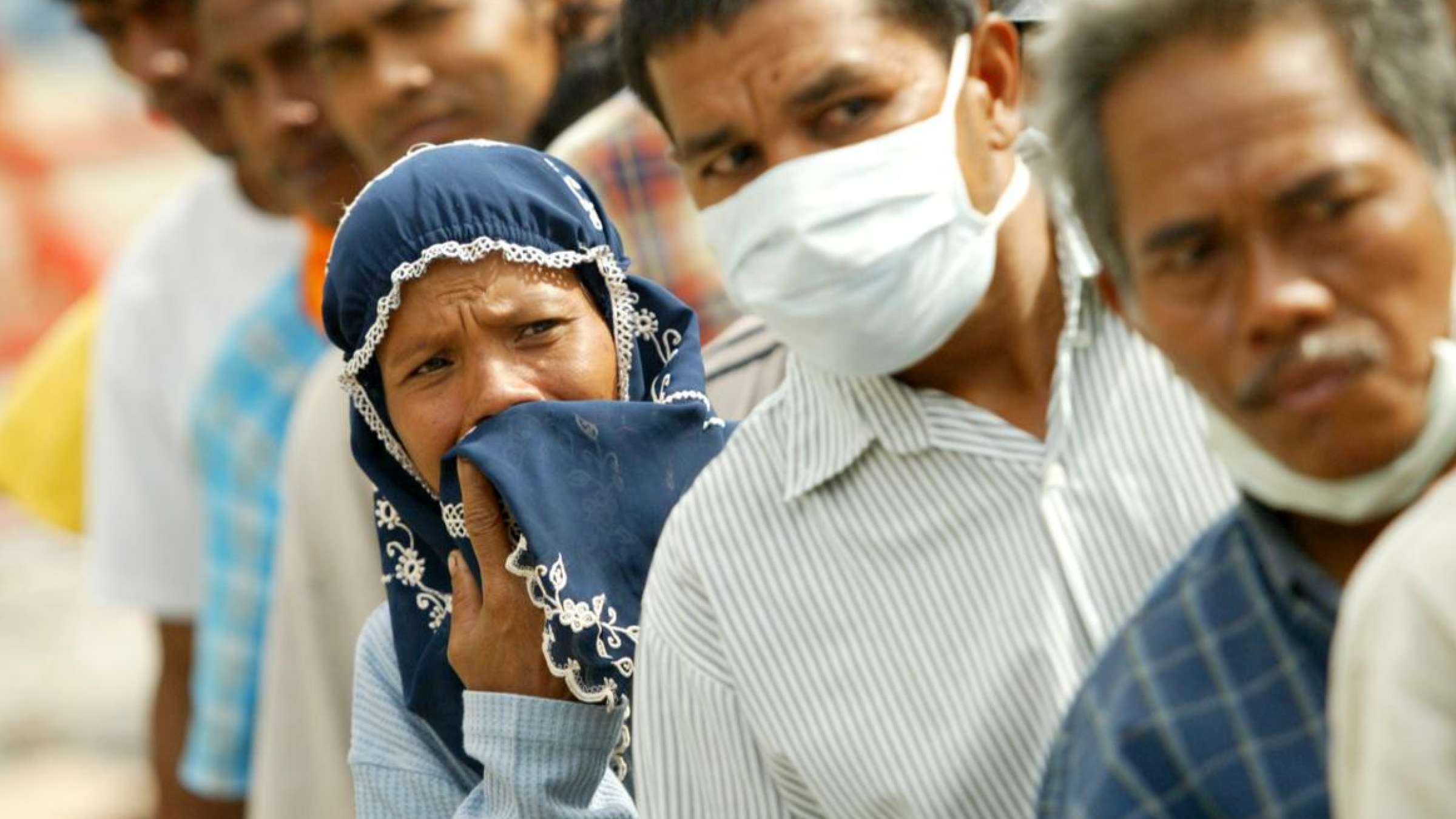 On December 26 2004, waves triggered by a massive earthquake slammed into the coastlines of countries ringing the Indian Ocean. The death toll was enormous. Worldwide, it is estimated that about 230,000 people died that day. Aceh province, on the northern end of the Indonesian island of Sumatra, was hit hardest. There, more than 160,000 people – nearly 5% of the local population – were killed. In the worst hit areas, survivors lost their homes and livelihoods and saw their communities reduced to rubble.

Over the months that followed, governments, religious organisations, NGOs and individual people delivered substantial support for humanitarian assistance and rebuilding. Multi-year reconstruction projects began and Indonesia committed to building back better. Much of what has been learned from that disaster is relevant when considering how the world will recover from the coronavirus pandemic.

In the immediate aftermath of an event like the 2004 tsunami, the path forward is not clear. So how have those from affected regions fared since the day the waves crashed ashore? Over the last 16 years, we have followed people and their families who were living along the coasts of Aceh and Northern Sumatra, the two most northerly provinces in Sumatra, as part of the Study of the Tsunami Aftermath and Recovery (STAR).

Experiences of the disaster and its aftermath, and the meaning people take from them, have varied.

One young man we spoke to lost his wife, child, and 27 other family members in the disaster, but has since remarried. He says that the time since the tsunami has taught him that life sometimes brings happiness and sometimes not, but that affection is critically important.

Another young man who lost a wife and child has also remarried. But he told us that the time since the tsunami has not brought any positive changes in his life, though he is deeply committed to earning the money to support the education of the two young children he now has.

Our data covers the population before the disaster and measures exposure to the disaster in terms of impacts on both places and people. We have been able to measure the disaster’s various impacts on wellbeing and shed light on some of the key drivers for recovery.

Death is the most extreme consequence of exposure to a disaster. Some deaths are immediate, but others may occur over the years as sustained exposure to stress takes its toll. Teasing out how disasters affect mortality risks is complicated, but can provide clues about what will happen when disasters strike in the future.

Tracking mortality among survivors in the years after the tsunami provides direct evidence on people’s resilience. We see resilience as the ability to minimise the negative impacts of difficult situations and move forward effectively afterwards. The devastation caused by the tsunami has the potential to “scar” people, resulting in their premature death. But equally, the survivors may have protective traits that are associated with better health and longevity.

We examined mortality for survivors at five years and ten years after the tsunami. We found that among adults, both these factors are in play and that they operate differently for men and women.

Five years after the tsunami, there is clear evidence that for male survivors who were aged 50 and above when the disaster took place, those from heavily affected areas were more likely to still be alive than those from relatively unaffected areas. This shows that over this period, certain protective traits of survivors (perhaps general fitness) appear to exert a stronger effect on longevity than any “scarring” elements of the event.

But for women over 50, the reverse was true: we found that survivors from heavily damaged areas were at higher risk of dying over the next five years than women from unaffected areas.

These basic patterns were still apparent ten years after the disaster. But by this point, the evidence shows that in particular, post-traumatic stress for older men or the loss of a spouse for older women decreased the likelihood them still being alive. Although the two events are of course extremely different, these results should encourage us to reflect on what the long-term health effects of the COVID pandemic might be.

We’ve also been looking at the evidence for how the extraordinary stresses of the tsunami affected survivors’ health and wellbeing. A large fraction of the people in our study reported high levels of post traumatic stress symptoms; for some, these resolved quickly but for others, they persisted for several years.

These patterns point to a long-term scarring that gets under the skin and will likely affect disease progression and mortality in the years to come. Specifically, several established biological markers indicate that some survivors who directly experienced the tsunami are at higher risk of chronic illnesses such as heart disease and diabetes. Again, this raises questions as to how the stresses of the COVID-19 pandemic will affect long-term health.

For very young children, we found that exposure to the tsunami could leave its mark on growth. Child height is a powerful predictor of health, mortality and socio-economic status in adulthood. It is largely determined in the first few years of life. We document that children who were in utero at the time of the tsunami were small at birth and significantly shorter at age three.

For many of the children, these deficits were made up in subsequent years and they eventually attained the same height (given age and gender) as peers not yet conceived when the tsunami took place. This suggests that, at least in this dimension of wellbeing, resilience is high, although we cannot rule out longer term consequences of rapid catch-up growth that may be linked to elevated risks of poor health in adulthood.

We have focused here on differences in the evolution of health by level of exposure to the tsunami and the stress it caused. But efforts to help affected populations meet basic needs and recover after the disaster changed the environment, possibly in ways that positively affected people. Indeed, the results for children’s nutritional status are likely attributable, at least in part, to improvements brought about by humanitarian assistance and reconstruction.

In addition to providing immediate help for things like water, food, clothing and shelter, over time assistance programmes provided work opportunities as well as funds and materials to rebuild houses, schools, health facilities, community centres, mosques, roads and other infrastructure. These efforts were extremely successful.

We found that among those who owned homes that were destroyed, 80% had a replacement house within five years of the disaster. Those who were economically worse off before the tsunami were more likely to receive an assistance house. Both quantitative data and in-depth interviews suggest that the housing programme was the most important type of assistance people received.

The end result was a rise over time in the proportion of adults who reported working — an impact that was strongest for prime-age men but made less of a difference for older men, for whom the strength requirements of the work may have been too much. And we found an uptick in work for pay (rather than unpaid work or family care) among women from heavily damaged areas in the aftermath of the disaster.

Not all of those who wanted jobs were able to find them nearby. Migration towards heavily damaged areas picked up quickly, both because those who had left shortly after the tsunami returned home and because people from undamaged areas moved towards the work opportunities that arose from reconstruction. This offset some of the population losses from people dying in the tsunami or moving away from the damage shortly afterwards.

Understanding how people and populations are affected by events outside their control and evaluating the effectiveness of policies and programmes is critical in responses to disasters, pandemics and other threats to population health and wellbeing. The implications of these events are complex and continuously evolving, and patterns vary with age, sex and other socio-economic and demographic characteristics. It is difficult to overstate the diversity of experiences and outcomes in the years following the tsunami and it is critically important that we understand the factors that drive this diversity.

Our research highlights the importance of policies that mitigate post-traumatic stress, help people get back into stable housing, and provide opportunities for paid work. They have important benefits for physical and for psychosocial health, as well as for economic wellbeing. As the world continues to struggle with COVID and attempts to restart economic progress, safety nets that address health, stable housing and economic opportunity are likely to pay off.